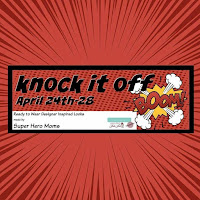 Today, I'm one of the stops on the Knock It Off Tour sponsored by Lulu and Celeste and Sprouting Jube Jube.  The challenge: create a "me made" item inspired by retail items.  I spent a good chunk of time looking through Pinterest and Googling different stores to figure out what exactly I wanted to make.  I landed on two outfits: a Dolce and Gabbana cocktail dress and a more casual retro style dress from Alexander McQueen.  Both were way out of my budget, but hey, that's the beauty of being able to sew!!

The first dress that caught my eye was a simple cocktail dress with a lace overlay skirt.  I found a striped floral lace dress on FarFetch.com, and it appears that it is now sold out. However, at the time, it was listed at $3,495.  Just a little out of my price range.
I took a look at the patterns in my stash and found the Talia Fitted Dress from Laela Jeyne.  It had the option of both a round or v-neck bodice, and it's already a sleeveless dress so it was perfect.  The pattern doesn't call for an overlay on the skirt, but that was an easy enough mod to do.  I also left the skirt as drafted with a little less gather on it since I didn't want to add bulk around the waist. I opted for a red satin as the underskirt since I made this dress for the annual ladies' tea at my church and wanted it to match the "Shine" theme.  I also opted for smaller stripes on the bodice! 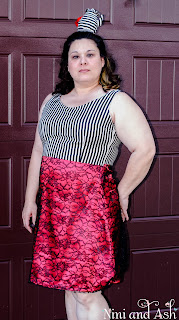 Not exactly the same as the D&G dress, but I definitely love the pop of color in the skirt! I also made a teapot clip to go with my dress using the Mad Hatter Tea Set from Super Pop.  The original pattern is for a fabric tea set, but I just used some polyfil to make the teapot into a stuffie that I could attach clips to. 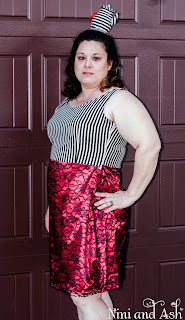 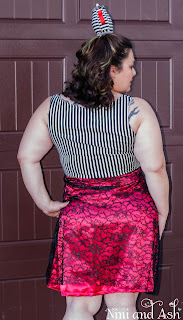 In total, this dress cost me about $25 and two hours to make, so I would call that a win!

After I found the D&G dress on Google, I stumbled onto another dress that I was over the moon for. It was a retro style plaid dress by Alexander McQueen.  The top caught my eye because it reminded me of the inside of my favorite Burberry's coat.  Then, I saw the rest of the dress and was sold.  When I looked at the price tag on this one, it was $1,095 on Lyst.com.  Of course it was because I liked it...back to the pattern stash.

Alexander McQueen was known for his crazy and wild designs, and I've always loved his creations. This dress, however, spoke to me.  It didn't speak loud enough for me to spend over a thousand dollars on it, but it spoke loud enough to inspire me to make one similar to it!  I found the Santa Fe Scooter dress from Bell Bottom Girl.  The original pattern has a longer torso and a shorter flounce than my inspiration dress, but I simply shortened the top by 6 inches and added that to the bottom of the flounce.  The pattern also didn't call for a zipper but I added one into the back seam allowance and didn't need to modify the pattern at all to make that happen. 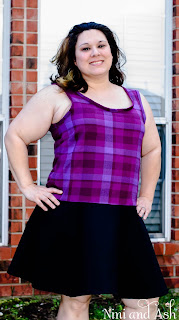 I also opted to keep the bias tape finished armholes and neckline of the pattern and went with a purple plaid since I'm just slightly in need of some sun after the winter.  I was concerned that a tan colorway would blend into my skin so purple it was.  I also didn't put a faux belt on the waist so that attention wouldn't be drawn to my waist. 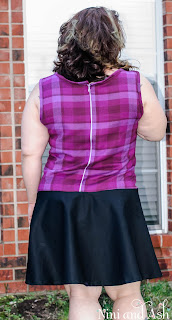 The fit of this dress is relatively loose so there is plenty of room to move around in it.  I love the overall look and fit of this dress, and I do think that I will probably be making a few more of these before the end of the summer!

For this dress, I spent about $15 for materials and an hour of sewing time.  I would say that $40 and about three hours of my time is a win for two new dresses that would have cost me over $3,500.  I told my husband that I saved him thousands of dollars by spending just $40 at JoAnn's.  I don't think he's convinced, but I'm standing by that statement. :)!

Thanks so much for stopping by and visiting today!  We're only on Day 3 of the tour so there are plenty of designers still to come.  You can also visit the designers from Day 1 and Day 2 by following the links below!

Thanks again for stopping by today!

Blessings and Happy Sewing,
Kim
Posted by Nini and Ash at 6:57 AM